It appeared to go all ok.
I managed to get everything all set up outside, then once it got dark, did the star and polar alignment. Things were looking good. The test exposures appeared ok and the guiding appeared to be behaving.
Set of the imaging plan to run for 3 hours at 180s exposures.
Went outside to check on everything  a couple of times, and much to my surprise, it was all still going ok!
Towards the end of the plan, I went out, I think it was on number 58 of 60. The guiding had just started to complain, as the scope had gone down in behind a tree as it was tracking M27. The image was still fine however.
I called it quits for the night as the high level clouds were more apparent. The next day, I copied all the data onto my main PC, and this is were the problems began.
I could not get any of my usual stacking programs to behave. In particular DeepSkyStacker, it would see the stars, even after adjusting the brightness and star threshold.
In the end I just had to take one of the raw images and play around with it in PixInsight and Gimp and get it the best I could with my limited knowledge of post processing.
So this is what I got, 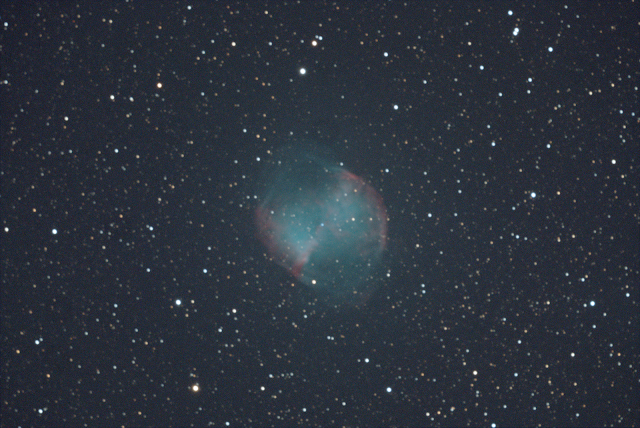