Cobbling together a Nikon FTZ Adapter from other 3D Models


Recently I had purchased a telescope. I then spent some time getting familiar with the telescope, and researching which camera I was going to buy for doing some astrophotography.

And this is where I started to run into problems. Getting the right adapters to go from the telescope to the camera was a nightmare. Not only that, but living in Cyprus, it can sometimes take time to get stuff here if ordering from off the island, and when needing something now, there lies an issue.

We have a couple of shops on the island that hold telescope and astrophotography equipment. And of course a few shops that have camera equipment, but stock is usually a problem.

I had settled on a Nikon Z50 and while waiting for it to be delivered, I had placed an order for a projection eyepiece adapter to go from the 1.25" to a T-Ring, and a Nikon T-Ring.

The shop contacted me to say their stock system was wrong, and unfortunately didn't have the available adapter. I asked what they did have and he suggested a variable focal eyepiece and necessary m43/t-ring adapter, as well as the Nikon T-Ring that I had originally ordered. Great.

The telescope equipment arrived the next day, and the following day, the camera arrived.

And this is where things started to go wrong. The Nikon T-Ring was for the Nikon F-Mount and the camera used Nikon's new Z-Mount. AARRGGHH!

I thought I could put my 3D Printers to use here, so started to search via Google for an suitable F socket to Z adapter, but couldn't find anything. Found heaps of other similar models, but nothing that would match a Nikon FTZ adapter. None of the camera suppliers listed a genuine Nikon FTZ adapter available either. AARRGGHH x2 !

Ok, so time to start getting creative here.


First up, I managed to find a Sony E-Mount body to Nikon F-Mount Lens adapter by Bluebie

Second, I found a Copal #00 to Nikon Z Mount Adapter by nsandin88

I downloaded their respective STL and OBJ files and imported these into Tinkercad. It was then possible to chop up these two objects, taking only the parts I needed, and mashed them together into one new piece.

This didn't go to smoothly to start with;


Here are some of the initial failed attempts, all the usual stuff you can expect when prototyping! 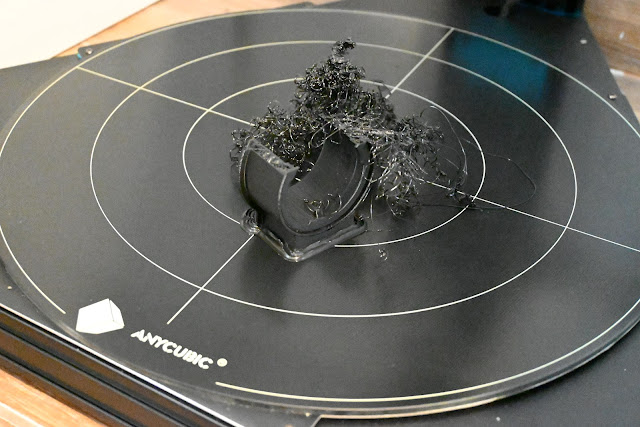 After the various iterations and attempts, I eventually ended up with two parts that nicely screwed together and attached cleanly to the T-Ring and the Camera.

Here is half of the model printing on the Mega-S; 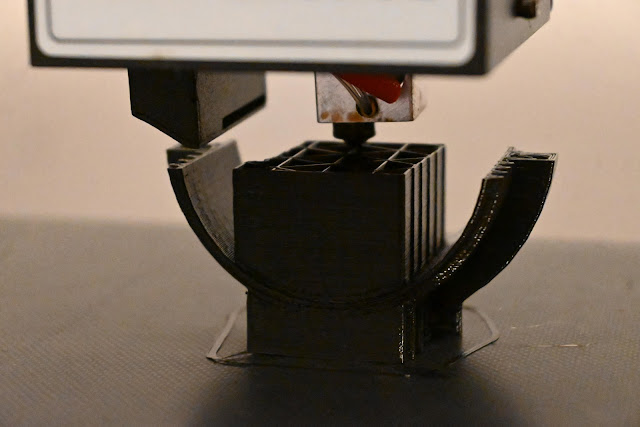 I had both printers going to reduce overall print time; 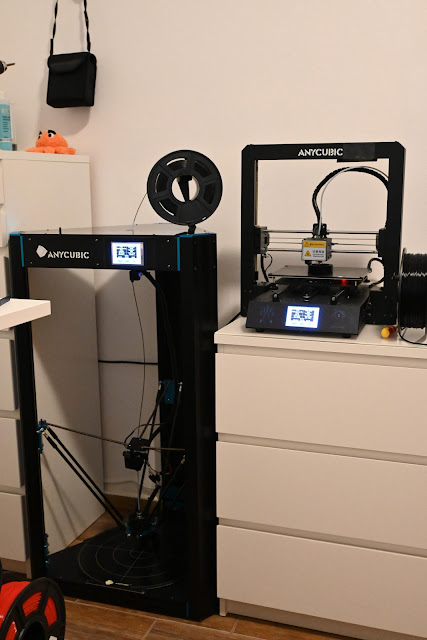 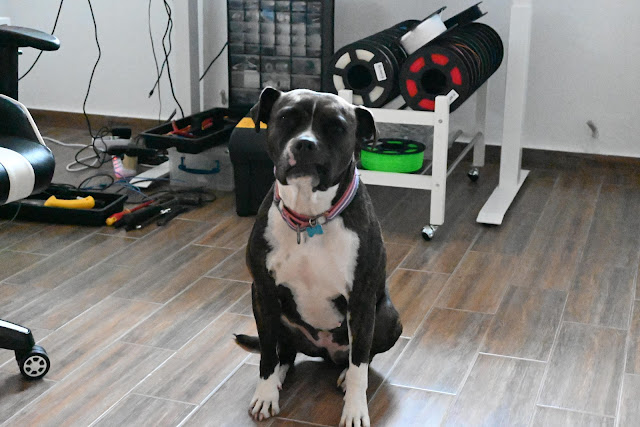 There was a slight gap on the T-Ring that needed filling to take up the slack due to the profile of the T-Ring, so I knocked up a spacer shim.

Here is what it looked like with the 2 parts + shim attached to the purchased Nikon F and M43 adapters. 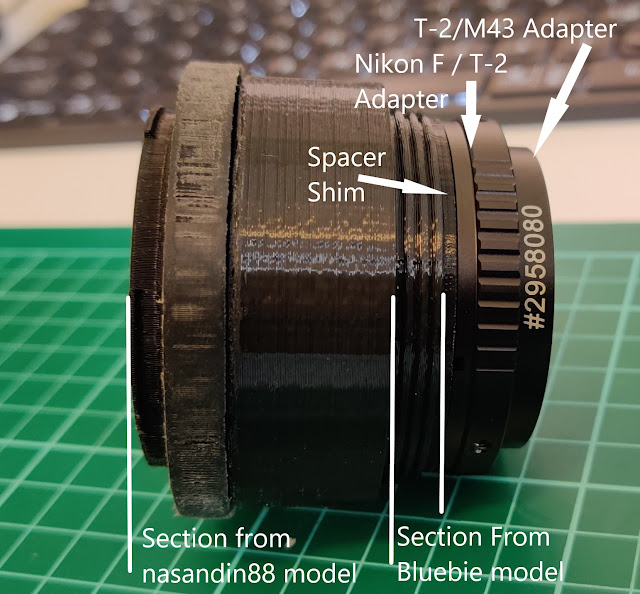 And this is it fully assembled on the optical train, from the camera, to the part printed to the variable 8mm-24mm eyepiece to the telescope. You wouldn't believe how long it took to get the right combination of components to get the correct back focal length so the camera could actually get a focused image!
I used a dot of Maya's red nail polish to show where the lock alignment goes on the camera

Here is the current model on Tinkercad, at https://www.tinkercad.com/things/7TM71jA23f6, it doesn't exactly match the one printed, as I was in the process of changing it to remove some of the unnecessary detail to simplify the printing, while the 1st attempts were printing. I haven't yet printed the revision. You could easily, duplicate the model and then roll back any amendments and tweak to how you want it.


I still think there is a lot of room for improvement, but at least it works and managed to get my camera attached now!
If I was to change it further, I think I would shorten the overall length, remove some of the internal hidden structure, caused by threaded section one of the source models had. This should simplify the printing and post clean up.

Anyway, we got a result, and that's what matters!

A big shout goes to Agapios at 10.10 Asteroskopeion in Nicosia, for his help and supply of some of the adapters and eyepiece. Definitely recommend you check out everything they have to offer.

Now I just need some clear skies and not this rain we have had the last couple of days!