There was a spot of dirt on the finder scope lense piece, but wiping on the outside of both ends made no difference.

I removed the eyepiece and for whatever reason, shoved my finger inside, which then felt something giving way. This obviously result in a wee sweary moment as I realised what I had done.

As with all matters like these, I headed off to youtube, where I found the video below of a guy repairing his gun scope. He said in the video that he had tried other things, but hair was the best, other things "look like an arm in there".

Having looked into the eyepiece from the inside edge, I could see the mount the cross hairs were in, the ring looked like it had been glued in place, and didn't want to try and remove it. As the alignment of this was not critical, as I could align against the main scope a distant target, as long as there was a point of reference all would be good.

After a bit of patience, I end up with what I would class as a pass. 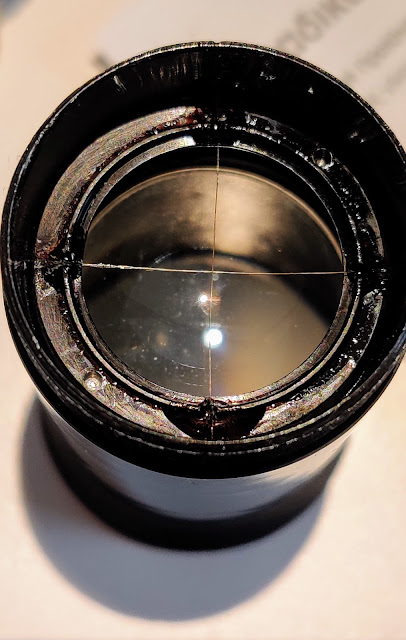 I dare say it won't be the last time I will have to do this, so practice makes perfect!