Back in 2018 was the first iteration of my solar pool heating solutions (if we can call them that!). This was up in the Tala rental villa, it used the pool filtration pump to circulate water round 100m of 16mm irrigation pipe.

It was low flow, but did give a high temperature increase of the water outlet, in all pretty limited. 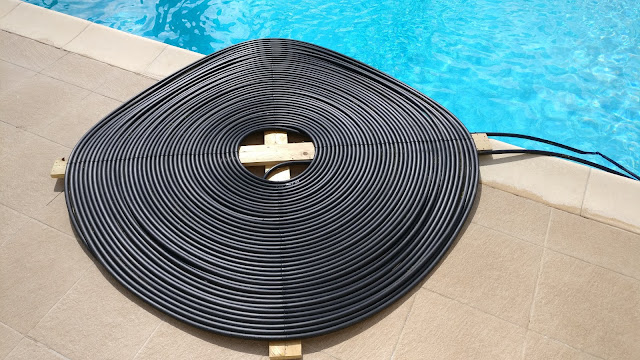 In the summer of the same the year, we moved to the Emba villa rental. Here they didn't have any pool filter jets to hook into, so I had to look at another pump option. This is when I turned to small 12v solar pumps. 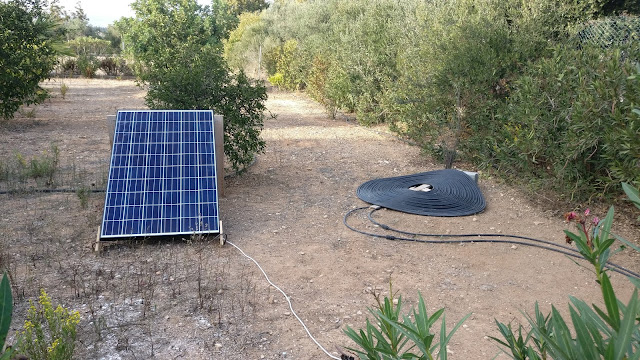 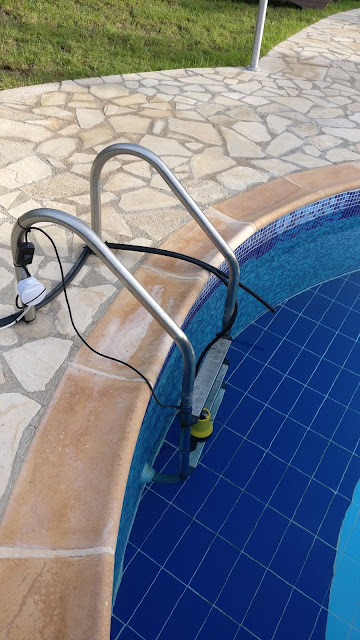 For this setup I used the same spiral, but got a small bilge pump, but these really were poor quality, and failed very quickly. Although the solar panel worked a treat. The flow through this setup was terrible, so I needed to upscale things.

When in the local DIY shop, I noticed higher 3000 GPH 12V bilge pumps on the shelf, so I grabbed one of them and small length (30m) of 32mm. Went home and hooked it all up and the flow was amazing, but the temperature increase wasn't really terrific, that when I added more 32mm pipe until the flow and the temperature was acceptable. And that is where we are now, approx 150m. 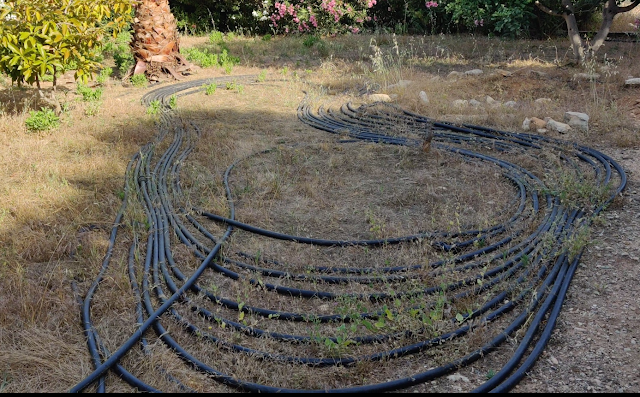 Unfortunately, The first system wasn't really automatic. If you didn't turn the pump off at the end of the day, it would run for hours in the darkness draining the battery, so in the morning, you would have to wait for the battery to charge before the pump would come back on, wasting a lot of available sunshine. This is also bad because, circulating the warm water through the coil cooling it by the night air.

Then of course I had the charge controller fail on me. So it was time for an upgrade. This time, adding in some temperature control. Here is what I had planned. 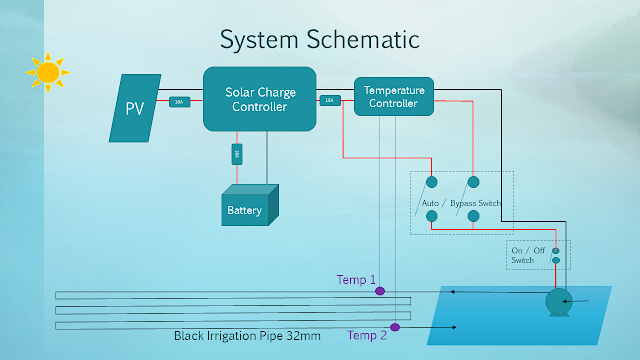 Originally I had the 32mm pipe running back and forth in one part of the garden out of sight, but the position relative to the bushes meant it was late morning before the system was getting any heat. I moved the pipe more central, so now the system is online by 9.30am.

I found a differential temperature controller on Amazon some time ago, and picked up another replacement charge controller from the local shop in Paphos. Unfortunately, they were out of 20 Amp units, and only had 10 Amp, which is just above the maximum the panel will push out. Would have preferred to be higher, but maybe change it later (I'll maybe be forced to again!)

This time round I also added some MCBs on the Panel, Battery and Load, all 16A just in case there is a failure or short so that I don't get a major repeat of the last meltdown.

Also had to replace the battery, as it was no longer taking a charge after 2 years of abuse. Pretty normal life for the operating temperature.


How does the control work?

The two pipes from and to the pool run side by side, but the one from the pool is shadowed under the panel, while the one to the pool is in the open. In the morning, the sun rises and starts to pre-heat the water coil, the sun continues to rise and then starts to heat the bit of pipe with one of the temperature sensors. This creates a differential in temperature between the 2 sensors.
When the differential is greater than 2'C it starts the pump. The target setpoint for the water temperature is currently set way out so that it just runs the pump all day. Once the pump starts, the water in the coil is now dumped into the pool and the cooler water from the pool now enters the coil, this difference now maintains the differential temperature and keeps the pump running.
As the sun starts to set in the evening, the heat into the water decays way, until there is no longer any differential and the water from adn to the pool equalises, the controller stops the pump. It just waits now for the next morning again.

There is also the charge controller for the battery. If it detects the battery voltage dropping below 11.1v, it also stops the output to the pump until the battery charges sufficiently.

The solar panel provides 9 Amps and the pump runs at 5.5 Amps, so the pump comfortably runs all day if the sun shines.

I also fitted a bypass switch to manually put the pump on, just in case it has been cloudy early in the morning and the differential hasn't been created sufficiently to start the system. I can kick start by jogging the pump to get the system going. Although, I haven't need to do this yet.


What are the numbers?

System Voltage: 12V
Pump Current: 5.5A
Pump flow rate: 1000 litres/hour
Temp increase: +5'C
This is equivalent to around a 5kw heater being on all the time.


In the following video I walk through the system, show the pool, pump, panel/controls and location of all the pipework and current temperatures on the system.

So, there we have it. And for the start of May, the heater + the pool cover means we are already over 30'C. During April we were seeing around a 0.5'C per day increase on the pool temperature.
Labels: General Solar
Location: Paphos, Cyprus