With the rise in value of the coin, I wasn't going to let that go to waste and had the intention of exchanging it for other coin that looked like it potentially for higher growth.

Prior to packing my PC into the shipment for the move, I had tried to get the blockchain up to date, but that was taking an eternity as it was over 3 years out of date. I gave up and packed up the PC anyway.

On my laptop, I used a back up of the wallet file and then tried to re-sync the blockchain, however again, this was painfully slow. All the transactions were visible in the wallet, but were listed as 'Conflicted' and the balance did not show. This is because the blockchain was not yet in sync.

It was at this point I though it must be possible to download a blockchain snapshot to at least get it up to date quicker. And of course, it was time to search Google. Simply searching for Dogecoin Blockchain File, provide a result taking me to https://bootstrap.chain.so/ which also had instructions on what to do.

Leaving the download overnight, as it said it was 7.5GB, in reality it was 13GB the next morning I copied the file into the correct Dogecoin folder, opened up the wallet app and left it to do its thing.

You can see in the image below [A] the progress in the main window, and in the debug window, where it clearing states importing from disk, in [B] you can see the transactions which are now confirmed as they have synced with the blockchain, and in [C] the transactions still listed as 'Conflicted' as the sync hasn't reached those transactions yet. 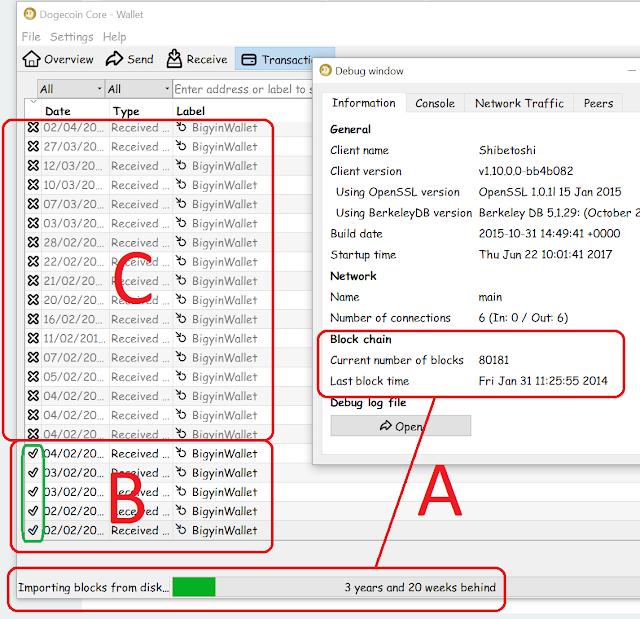 After about 4 hours of doing the block import from the bootstrap file,  I noticed it then switched to Network Sync with over 1.5 years still to sync. The bootstrap cannot have been updated for a while. Still probably gave me a good head start, just no telling how long the remainder will take!
Switching to the network view of the debug window, you can see how much data has been download. The graph below is set for a 30 minute window, and after approx 15 minutes it has downloaded 1GB. 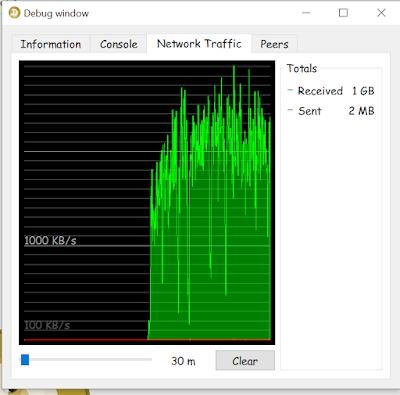 Unfortunately, after about an hour, the network performance dropped significantly, with frequent drop outs. This really slowed things down. This wasn't an issue with the Dogecoin network, but local internet. The IPTV services we were watching at the same time were also affected. So after about 9 hours after the network sync started and another ~11GB download it is complete!

Once the blockchain had fully sync'd, I could then simply send the coin to the exchange where I could convert them to another currency or cash out if I wanted it. The reality is though, I was going to put this to use and convert the coin to Ripple (XRP). Ripple is a "Global Settlement Network" and the underlying coin is used as the transaction payment mechanism. It is currently the 3rd largest cryptocurrency with a market cap of just over $11 billion.

I decided I was going to give Changelly a try, and this was a case of setting up a transaction for the amount of Dogecoin I wanted to convert, which coin I wanted to convert to, and of course the destination wallet address for the received coin. It was simply a case of sending the amount to specified Changelly address. Just remember to factor in any transaction fees on the originating network, as I forgot about that the first transaction I set up, and the amount I would have sent would not have matched the amount Changelly was expecting. I guess that first transaction will just timeout when it never sees the transaction amount come in. Anyway, the second transaction was sent, received and verified by Changelly, converted to XRP and deposited in the destination wallet. The whole process only too a few minutes. It is when you can how quick things like this can happen that you see how poor current financial and trading platforms are. Could you imagine how long it would take to sell some shares, wait for it to clear, then buy some other shares. You would be talking days.

With regard to Dogecoin, there is now a new client wallet available which does not need the full blockchain to be downloaded onto your PC, so I could always move the coin to a new address and use the new light wallet. I did try and recover the wallet files between the two, but these were not compatible, so was forced to go down the full re-sync route.

Remember: Always keep copies of the wallet files on another medium/location and never work with the original, just in case something deletes or corrupts them.

If you were to be starting new with Dogecoin, unless you wanted to do mining etc. there would be no need to use a full client, and the light wallet would be sufficient. You could of course simply use an online hot wallet if you were not storing any large volume/value.

I guess keeping track of all the wallets and addresses is probably the hardest thing. As more multicurrency 'wallets' become mainstream, things should get easier.