Note: I originally posted this article on The CodeProject in June 2011, you can find the original at the following link: http://www.codeproject.com/Articles/204922/Netgear-GS-Blinking-Link-LEDs-Can-we-fix-it-Y

I was on a roll (I hoped), after successfully bringing back one of my dead JGS516 switches to life, it was time to turn the attention to another dead switch I had. Can I make it 2 for 2?

On the ground floor of the house, I had another network switch, this was for things like the TV, appleTV, etc. and as a backup for my laptop in the event my wireless went belly up. One afternoon, nothing would connect, and all 8 Link LEDs just blinked in unison.

The switch in question is a Netgear GS108, 8-Port Gigabit Switch.

I purchased it in April 2007, and it had served me well for 4 years before going on the fritz. It was originally purchased for £51 (UK Pounds), and today a replacement would cost £50.

WARNING: This repair involved the use of a soldering iron, and care should be taken to avoid burns, etc. Also observe suitable anti-static procedures to reduce the risk of damaging electronic components due to static discharges.........and another thing, always unplug before opening, and if in doubt, do not attempt to open anything.

The problem was that the device would no longer allow any connections, or traffic to pass across its ports, the Link LED of each port would flash on and off in unison.

After unplugging the unit, and undoing the screws at the back, I slid of the cover and inspected internally. There was no dust accumulations, no evidence of burning, and things looked relatively okay.

It wasn't until I took a closer look at the PCB, I observed that out of the 5 capacitors, 2 of these had slightly domed by about 1-2mm compared to the others. I suspected that these two capacitors had died of old age or whatever. I thought it would be worth a shot at changing them, as I had nothing to lose, and if it didn't work after this, I was going to need a new switch anyway. The 2 capacitors that had swollen are circled in the image below: 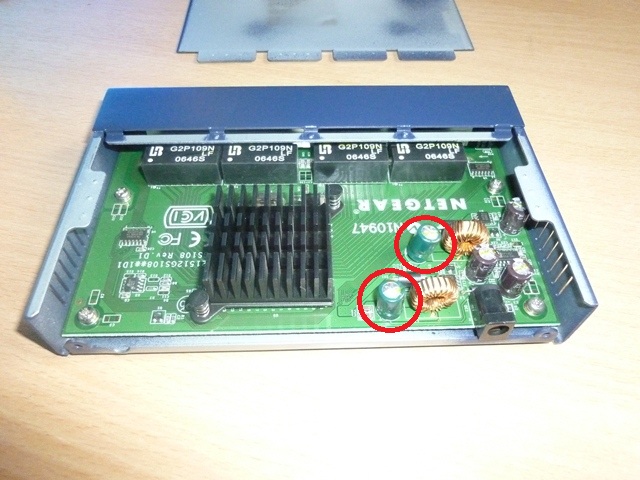 Now, the switch is a low profile unit, and although the capacitors would have probably fitted in just fine, I decided to knock these over at an angle, just to be on the safe side.

Powered up the soldering iron, whipped out the old capacitors, and installed the new ones. Refitted the PCB into the case, and took it for a spin. Worked first time, no issues. 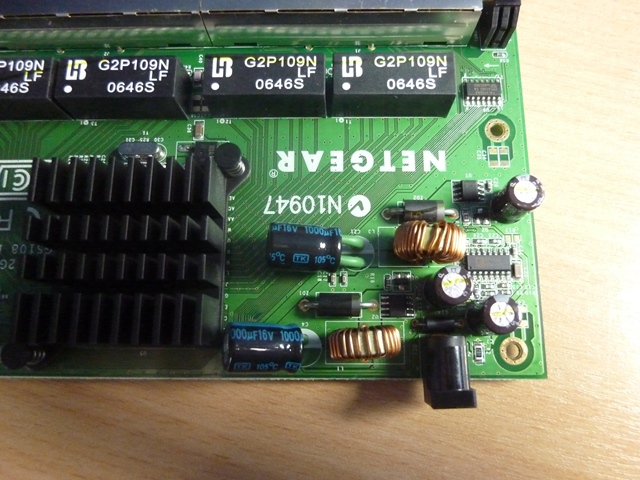 Good as new! Another worthwhile home repair.
So if you have a Netgear switch that is displaying the blinky flash of death, then it may be worth checking out the capacitors.....[after I fixed this, I did a search on Google and found others talking about the same fault].

May the Soldering Iron be with you!
Labels: Network Repair
Location: Doha, Qatar