For quite a few days I had been noticing some really odd behaviour on my laptop.

The OpenVPN connection would drop and not recover, and the OpenVPN GUI taskbar would show yellow instead of the normal Green connected state.

There were no errors showing up on the log and there were no messages to say the connection had dropped. I even resorted to checking the Windows event logger to see if anything was showing up there. Absolutely nothing at all.

The underlying WiFi connection would never drop out, and would also show that it was connected.

If you tried to navigate to a website, it would show no internet, if I clicked 'Disconnect' on the VPN UI, then it would then allow navigation to a website.

If I clicked the 'reconnect' button on the UI, it would usually re-connect just fine. Very occasionally however, it would show a "Waiting for TAP/Tun to become available" message or something like that.

Given the various states shown and actions possible I initially thought there was possibly a problem with the underlying Windows TAP driver, possibly a driver corruption.

Before I started messing about with any of the software, I did the usual, rebooting and also the enable/disable of the devices and drivers.

By now, I am thinking things are odd and now into wondering if I had a hardware fault with the laptop wifi card.

I fired up my copy of Homedale (can't remember where I got it from, you'll have to search Google), and noticed that the 5GHz wifi band on one of the APs was dropping in and out frequently, despite having quite a good signal strength, and wondered if that was why the VPN layer was dying, but the underlying hardware connection was showing ok, as it was recovering fine from the intermittent drop outs.

You can see on the channel and frequency view, the drop out occurring on the 5GHz, but all steady on the 2.4GHz for the same AP.

Switching to the signal graph, you can clearly see the 5GHz dropping. 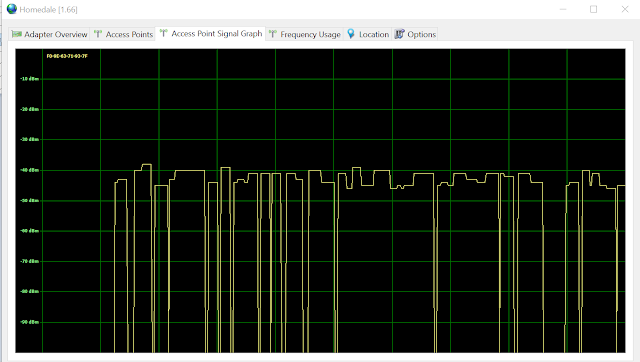 Now, having seen this on the graph, that might also explain why I see my tablet periodically drop out as well and then immediately recover. So suspect it might be more an AP problem, than my own hardware.

I dropped into the device settings for the laptop wifi adapter and forced the preferred band from Auto to 2.4GHz. 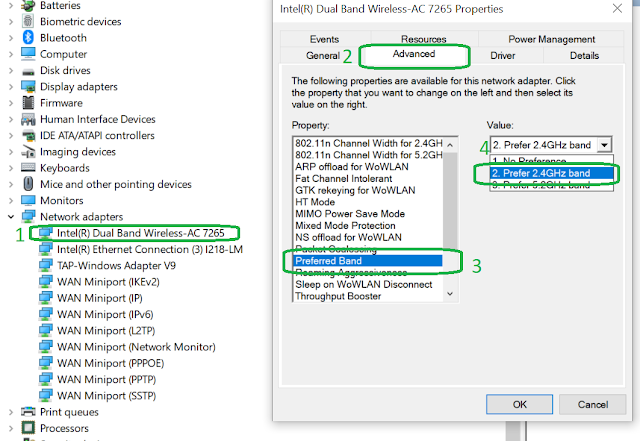 Having done this, I have had no issues since! Will have to look at my tablet and see if I can force 2.4 on there and rule out the laptop as being the issue.

That will do for the time being......maybe save prodding at the AP for another day.