I thought I would just share how things have looked over my first month on Genesis. As I said back in this post a couple of weeks back, I had decided to take Genesis Mining for a spin.

Over the course of the first month, there was obviously a sharp rise in cryptocurrency interest and the price of Ethereum started to go up, and subsequently so did the block difficulty. As a result of this, the daily payouts have steadily declined. They peaked at 0.06232985 and a low of 0.03504011, and no doubt will continue to drop if the block difficulty continues to rise.

In total, from starting the contract on 8th June, doubling the hash rate on 10th June, through to the most recent payment yesterday, I have received 1.54272847 ETH. It is important to note that the value of Ether has dropped steadily over the last couple of weeks from its peak of almost $400, to current price of $202. There is still a bit of instability, so this may drop further, but could just as easily start to rise again.

For me however, I have no intention of cashing out, and planning to sit on this. In fact I have also bought into with cash BTC, ETH and LTC during what appears to be low point or hopefully near bottom. I am planning on sitting on this for a few years, and a lot can happen in a few years. There are various analyst estimates out there on long term numbers, the most recent I have seen is 1000 USD for Ether by year end 2018. I don't think that anyone can really predict what the price will be. And with technology being such a fickle beast, there is no telling where competition or legislation could come from and further influence prices.

With the Ethereum contracts being a fixed price, 2 year, no fees, these will now just churn away until they decide that it is no longer profitable to mine, or Proof of Stake is enabled by the Ethereum Foundation, at which point they will switch to another currency.

I have no idea if this is a good investment or not, only time will tell.......one thing is for sure, need to hold and hope for a price rise on Eth. 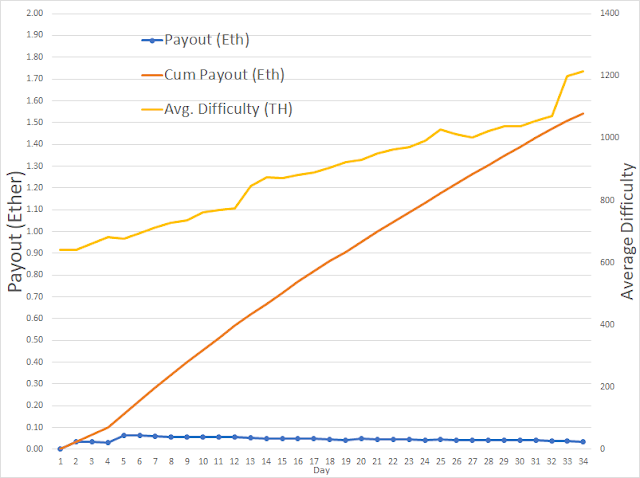 If you do decide you want to go and try then save yourself a little bit of money on the price of the contract, don't forget you can use my referral UFain1, or search the net for one of a million other codes out there.